Getting Salty in Point Roberts

I managed to make it out to Canada’s west coast the same time good friend and writer Nina was visiting with her friend Anne in Ladner. I joined them and we weren’t there long when Margaret, another old friend and voyageur, called us to adventure.

Did we want to cross the border? she asked.

Nina and I shared a knowing glance. Was Margaret referring to that intellectual hinterland that declared an environmental blitzkrieg? Nina asked. She is an ecologist and strong proponent of the environment. Nina also writes eco-fiction and climate fiction. The current rapacious U.S. administration's disrespectful and ill-treatment of the environment has driven her out of principle to boycott that country. 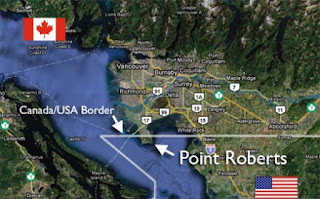 We exchanged another look; cute off from the rest of the United States, Point Roberts was practically Canadian, given that it was an isolated peninsula off Canada and once even considered seceding from the U.S. to join Canada. Wikipedia describes it as a "pend exclave" of United States, located on the southernmost tip of the Twawwassen Peninsula, south of Vancouver, B.C.


Point Roberts gets its name from Captain Vancouver, who named it after his friend Henry Roberts. It was officially declared part of the United States in 1849, when the Oregon Treaty extended the 49th parallel as the boundary between the U.S. and British territory (which Canada was at the time) from the Rocky Mountains to Georgia Strait.

After thinking it over, we replied, "Sure!" We were eager for adventure, after all. Something that might get our feet wet or us lost then found. Something big ... or small. Something outside then inside...

So, we went on walkabout ... well, drive-about, to be precise. We drove into that sleepy American community of 1300 or so people, looking to discover something or someplace.

After an uneventful border crossing, we drove along Boundary Bay Road through a sleepy community of cottages that faced the bay. From there we drove to Lighthouse Marine Park for a walk along the ocean shore, where we picked up whelks strewn on the pebble beach and watched a purse seining boat put out its net. The day was sunny  but not overly hot. A cool sea breeze brought the smell of brine and seaweed.


I was soon peckish from the sun and sea air. We retraced out steps to a charming cafe with outdoor patio for lunch and settled on the back patio. Saltwater Cafe has been around for a while; long enough to have plenty of character both inside and outside. The current owner has been there over 17 years.

We decided on two platters to share: the Wedge and the Charcuterie Plate. Both were exquisitely presented and thoroughly enjoyed over Moscow Mules (Vodka, spicy ginger beer and lime juice) and lively discussion that excluded politics.

Owner and chef Tamra Hansen--also a Canadian--uses local ingredients for the rotating menu based on what's in season. We know, because when Nina entered to get two coffees, we overheard Tamra instructing on of the servers to being in some lavender from their garden (for the Lavender Mojito--one of their signature drinks). That's fresh!


"Located on Gulf Road, in Point Roberts, Saltwater Cafe is the establishment we've longed to create. After starting and operating a large number of successful restaurants both locally and nationally, we decided to settle back in Point Roberts and open something close to our hearts.

"Out menu is inspired by authentic cooking and the diverse flavours of the Pacific Northwest, made utilizing local ingredients gathered by Chef and owner, Tamra Hansen. We have a huge range of rotating specials depending on the season, featuring BBQ, wood fired pizzas, sandwiches and more! In addition to our specials we have tons of delicious cakes, muffins and pastries. Find them all lined up on the bar as you walk in. We also have a 'pick your own' sweet counter, great for kids and big kids alike."

Here's what Nina, Margaret and I had from the menu that day:

Charcuterie Plate: assorted gourmet cheeses and meats, served with nuts, fresh figs and other seasonal fruit with a side of freshly baked bread.